Ebtedayee Dakhil certificate PDC Examination for the board of Madrasah is the alternative of PSC primary level education method. Students who studied from Madrasah Education structure then it’s called Ebtedayee PDC in the Primary level of public examination.

There are also a thousand students are participate in Ebtedayee examinations. But not same to PSC examinee. Primary school certificate PSC has a lots o Students. All Ebtedayee information about exam schedule, Examination routine, Examination results and others information. 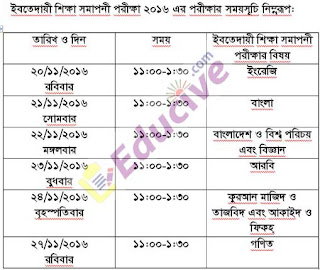 Around 34 lakh 50 thousand students will participate part in PSC and Ebtedayee Examination 2016 in this year. At that, the number of Ebtedayee and PSC examinee were 31 lakh. In the last year, average passing rates were 98.52% and 95.13%  PSC and Ebtedayee exam respectively. 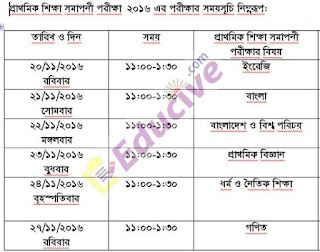 Directorate of Primary Education (DPE) formally publicized that’ Primary School Certificate (PSC) Examination routine 2016. PSC & Ebtedayee Examination held on November Every Year. This year also will be taken just on November 2016. Primary School Certificate PSC and Ebtedayee Dakhil Certificate (PDC) is the first stages of the student’s public exam in this country. In their participate thousands of little babies under twelve years. Essentially, they do not understand about this big public exam perfectly. But they only know that he/she has to get the Golden or plus result. And little Students have to try hard. Student’s parents also worried their baby’s Primary level first step final public examination. After completing this level, they promoted to secondary school certificate JSC level.

Primary Education and others information are found here

Dhaka Board, Rajshahi Board, Chittagong Board, Jessore Board, Comilla Board, Sylhet Board, Barisal Board, Dinajpur Board